Where do you begin to describe a music artist such as Leader/Composer/Lyricist/Arranger/Vocalist/Drummer Dave Tull?
Mid afternoon May 19, he modestly explained to the Santa Barbara Jazz Society, “I’m a drummer who sings”, yet that barely scratches the surface of Tull’s multi- musical gifts! With his casual manner, Dave certainly made it look easy, belting out song after song in dynamic sync with his drumming, accompanied by pianist Andy Langham and this trio’s first appearance with bassist Dave Robaire.
The Dave Tull Trio treated us to many of his original songs, which told spot-on stories ranging from being lost in love (I’m Forever In a Fog, I’m So Confused) to full Sinatra-style swing numbers such as Henrietta. But the tunes which really had the audience laughing so hard tears flowed were his songs Watch Your Kid (jazz waltz about a 3 year old running amuck), The Airplane Song(next time you fly buckle up to hear this), Please Tell Me Your Name, Clapping On One And Three, andI Just Want To Get Paid (all side musicians feel his pain!). With a sincere disclaimer to all the singers present (Dave reiterated this song did NOT apply to anyone in SOhO’s audience), he set up this pretty ballad with a rubato verse, followed by the accompanist’s bad dream theme, The Minutes Pass Like Hours When You Sing. Here’s just a taste of Dave Tull’s lyric: “I’ve practiced 30 years to be a musician in this band/You sang once at your sister’s wedding – you think you’re welcome on the stand/Oh the minutes go like hours when you sing…”His vocal style allowed for every nuance and word to be felt – the audience didn’t have a clue what the punch line was going to be until he teasingly concluded the phrase. 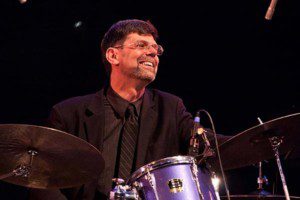 A few standards were included to add familiarity to the original tunes, such as the classic Jerome Kern tune, I’m Old Fashioned.The second set jumped out of the chute with a “burning off the burger break” version of Secret Love.A nice contrast to the trio instrumentation included the bass/voice duo version of Darn That Dream featuring wonderful new bassist Dave Robaire.
The SB Jazz Society heard fabulous pianist Andy Langham just a few months ago in Kristen Korb’s trio; once more we were treated to his expertise as not only a tasteful accompanist but also a hard-swinging soloist at the keys. Perhaps next time Andy will play a piano feature too? Langham showed his robust full-fingered blues chops during the Dave Tull original salute to singer Joe Williams, Every Other Day I Have The Blues – Tull’s clever lyrics sing a story about a billionaire’s woes, complete with a Joe Williams-style vocal yodel tossed in!
There were many more clever originals sung that rainy Sunday afternoon, available on both of Dave Tull’s albums, I Just Want To Get Paid (2008), and his most recent Texting And Driving(2018). Warning: Don’t drive while listening to these CDs in your car, or you might get so caught up in the lyrics you’ll miss your exit. If you wear make-up, just make sure it’s the waterproof kind in case you laugh so hard you cry!
-Debbie Denke